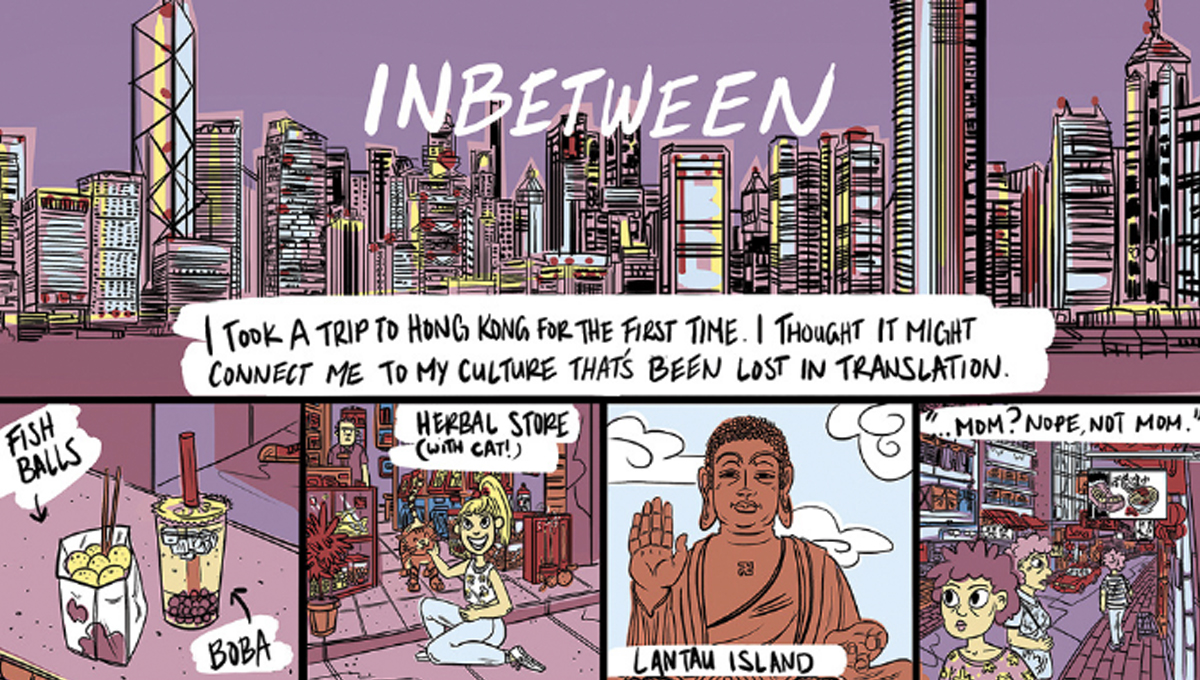 “I grew up in two worlds, half inside, half outside. But, I learned to accept it. In storybooks, having access to another world makes you magical. And who wouldn’t want to have magic?”

Hollywood-based artist Brenda Chi grew up at the intersection of two worlds as a Chinese American woman. And that’s what many of her comics and art pieces explore; being part of two cultures while also existing within the space in-between. Her work was recently featured on NBC news, and her comic InBetween – which explores being called “American Born Chinese” on a trip to Hong Kong in contrast to how she’s perceived in the states – was selected to be in the graphic novel anthology, New Frontiers: The Many Worlds of George Takei. From exploring the Chinese American female experience in her comic “No ni hao, thanks” to creating drawings about her cat Compton Duckwork (PhD.), Chi’s work can be as poignant as it can be funny. In short, she’s a badass. We talked to her a little bit more about her personal experiences, how art was therapeutic for her, and about where she finds inspiration.

First things first, tell us a little bit about yourself! When did you first start creating comics and art about your experiences?

I’ve been doing art since I was a kid and started taking it seriously in high school, ending up at a design college to pursue my fine arts degree. I’ve been drawing comics here and there, but it’s really been these past two years that I realized that I might be good at comics if I do more. I didn’t think I could do comics, but now I’m like nah, let’s do this.

In your comic InBetween, you say: “I grew up in two worlds, half inside, half outside. But, I learned to accept it.” What was that journey towards this acceptance like?

I think I learned early on that there were these two worlds, so growing up, I struggled trying to be more “Chinese” and then more “American”, trying to prove to “people” something. I’m now old enough to realize I’m me, and who cares about the rest. My point of view and others’ points of views are all different, and those stories should be shared instead of hidden. My journey now is embracing being Chinese American, and realizing that that is a voice not many people have heard. It bridges that culture that my parents raised me on, and the culture I learned outside of the home, and that’s my identity. I didn’t think I was good enough of such a person to share it with people, but I’ve realized, why not try anyway? So far, it’s been helpful to me in accepting who I am and can help others who feel the same.

People, go out and listen to that voice who wants to tell your story; that’s your magic.

Was doing art a therapeutic outlet for you when dealing with questions of identity?

Yes, art was therapeutic. It was my little place where I could express myself without having to feel judged by anyone. Looking back, I think there was a voice that I’ve kept quiet, hidden in little sketches, and now I want to bring that voice out. I mean, making work about being Asian American didn’t seem like I was going to make money as an artist. Of course, there’s plenty of Asian American artists out there who are doing that, but would I be good enough to be part of that group? So, that voice was just in a bunch of sketches, until now. People, go out and listen to that voice who wants to tell your story; that’s your magic. You know, Prince wouldn’t be Prince if he didn’t follow that magic.

What was it like getting your work featured in the comic anthology New Frontiers: The Many Worlds of George Takei?

It was surreal to be picked to join New Frontiers! Jeff Yang and Keith Chow are such big frontrunners for Asian American culture that it would be dumb not to do this project. I pitched my comic to Jeff and Keith, sent them drafts, revisions, then did the final. I was happy that my comic was even approved at the first draft because I never did this before.

How does Hip-Hop influence you and your work? What Hip-Hop artists are you most influenced by?

I’ve been drawn to Hip-Hop because there’s really good storytelling and writing in the songs. My favorite artist is Kendrick Lamar because he will tell you a story that you could never have experienced before, and he will take you there. You empathize with these characters and the way he talks about race is inspiring. He’s a poet, and if I could create a story as good as any of his songs, then I’d be happy. His work is honest, and I think that’s hard to find in mainstream music. The fact that he’s been able to do that and have people listen says a lot about how good his art is. I hope we get more artists out there influencing change and inspiring hope in people.

Tell us a little bit about your Artist Shop! What inspired the design selection

A lot of the designs are illustrations I’ve done that are either about empowering women, creating something influenced by my Chinese culture, Hip-Hop, and humor. I’m still developing the right pieces for the shop, but these themes are reoccurring.

What kind of reception have you gotten on your art and comics?

I’ve gotten positive reception of my pieces. The most rewarding are the pieces that are Asian American-themed, and having Asian American people come to me and tell me that they get what I’m trying to say and that they relate to it. That’s when I know that I’m doing the right thing.

What advice do you have for others who are going through a similar experience?

Well, I’ve felt a lot of imposter syndrome because I’ve now done interviews about being an Asian American artist. Part of me still feels like, ah, I’m not good enough to represent the ABCs (American Born Chinese), but my friend told me this: “Keep doing work.” and that’s the advice I’d give to others. The more work I do, the right type of pieces, I’ll feel like less of an imposter because telling these stories takes practice, and one day I’ll look back at my work and say, “Yeah, this is it.” This is where I wanted that voice to be.

Harder said than done…my philosophy is: “Keep doing good work and the rest will follow.” Being an artist feels like an endless journey of learning, so I try to embrace it. But the struggle is real, bills are real, and you don’t know when you’ll reach that “success”.

Yes: the best Chinese food in LA will be found in the San Gabriel Valley. Eastside/626 for life. And if you haven’t tried some boba milk tea, do yourself a favor and try it without making a face. I am also doing comics of my one-eyed gangsta cat, Compton. Check him @compton_duckworth on Instagram! I’m @brenda_cheese.