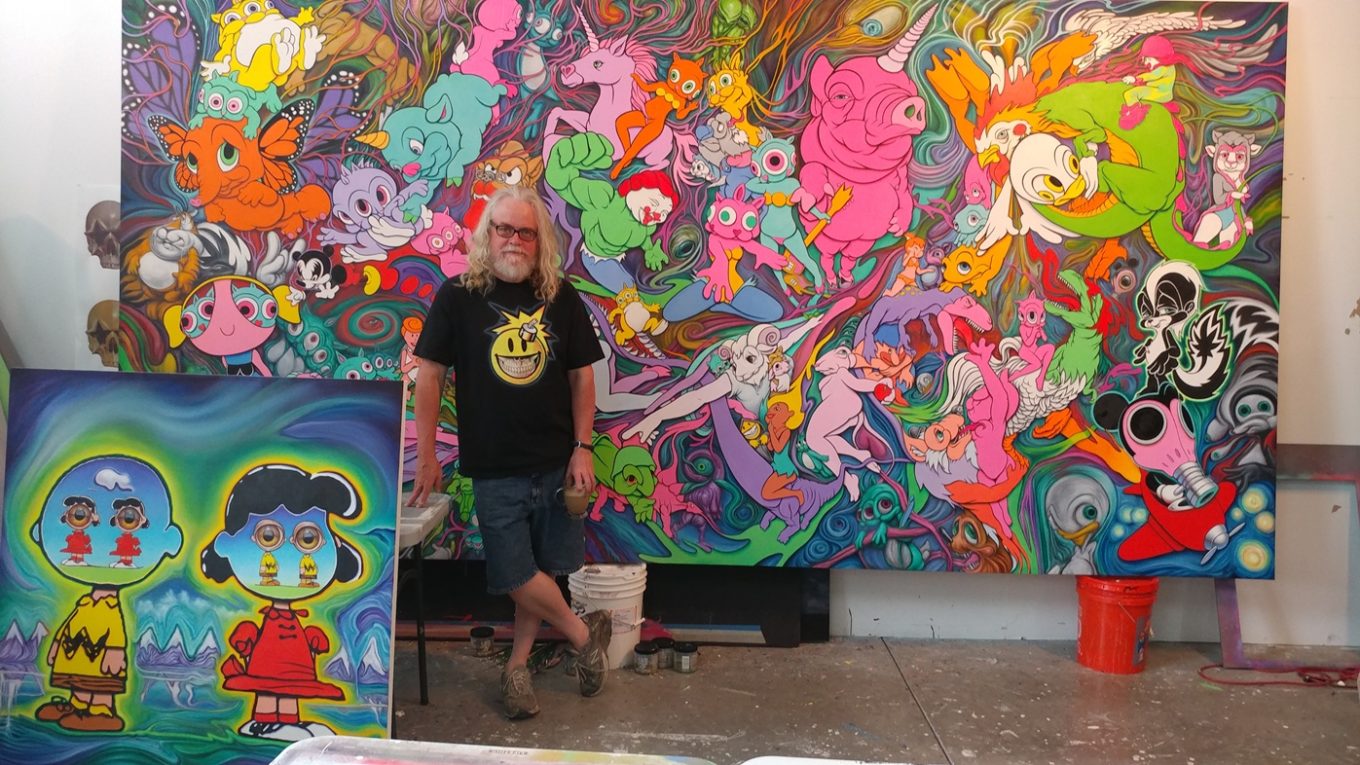 Over the past 30 years, New York artist Ron English has been creating adbusting pop art that warns us of corporate America; from fast food to smoking. He started out as a street artist in the 1980s, creating guerilla art on advertising billboards, but now paints artworks on canvas, animates, and designs toys. Today, he’s making face masks with Threadless.

A legend in his own right, some say that English was the pre-cursor to Banksy for his wit on the streets, and for his branding genius. He was one of the original artists who started making designer toys in the early aughts, ranging from Diabetic Bear to Supersize Me (long before KAWS and Takashi Murakami) and is known for an art movement he calls “popaganda,” which is a mashup of high and low culture, whether it’s an Obama Lincoln or a Mickey Mouse Marilyn Monroe.

For Threadless, English has been keeping busy in quarantine with a new series of face masks, which was born out of his wife’s efforts to help a local hospital during the peak of the pandemic, when there was a shortage of personal protective equipment. To date, English has created over 30 different face mask designs, from his trademark Grin to a set of flashy Temper Tots, a dystopic Mouse Mask and one he calls Delusionville Manifesto, among others.

English spoke from his New York studio about making a bold face mask statement, what he learned from Asia, why he loves supermarkets, and how he changed the game with designer toys.

These face masks are incredible! Which ones are new?

Ron English: I have 10 new masks based on my Temper Tot character, but the best-seller is the Grin face masks. They were huge in Asia for years, especially China, long before the pandemic. They wear masks there when they’re sick and because of the pollution. It has been part of their culture for a long time.

Where did the idea for the face masks come from?

It started with my wife making masks for essential workers. We have a relative who is a head nurse for a hospital in Texas. She said: ‘We don’t have any masks, I know you sew, could you make us masks?’ My wife made masks for free and shipped them to the hospital, then, more hospitals needed them, so we started mailing them to other hospitals, sewing every day, until we were wiped out of materials. All the fabric stores were closed. She was cutting up all my Popaganda t-shirts, to make masks. Then we got a call from Threadless, and it was such a relief. Finally, a real manufacturer is going to make these! It was a small miracle. Now, the collectors are happy. Plus, everyone has to wear a mask now, so it might as well be cool.

How important is it to not wear a same-old bland face mask?

I just figure, if we’re going to wear face masks, we might as well have a good time doing it, personalize them and make it fun. It gives people freedom to express themselves, while being civic-minded. We just took the approach to making the masks, as if we were doing the next clothing line. It could become a weird collectible from this period. It’ll be a fashion statement and fun now, later when it’s all over, it’ll remind you of those days and how you got through them.

Do you think wearing face masks is “the new normal?”

People will be wearing masks for a long time. I think because I spent so much time in Asia, everything I’ve ever seen comes to the west after the east. First, smartphones, then shopping technology, when I first saw GPS systems in Asia, I thought: “Wow, a cartoon tells you where to go!” A few years later, we had it. We’re lagging behind them in many ways.

How are you keeping productive during quarantine, art-wise?

My studio is in my house. I’ve been on the road for 10 years and it’s a grind, so I’ve never had this much time in the studio of concentrated time to work, try out new ideas and make art, enrich the universe. Everyone got their lives shut down, so they got to see their lives for the first time. It’s a crazy build then—boom. I had every day booked for the next year and a half. I was on a treadmill, then I wasn’t. It’s a different story for everyone, but I think everyone is going to be a different person.

What realizations have you had about your life and your art?

Everyone was just trying to make rent and get the kids to school, but nobody has had any time to just sit and stare into space. Think about it: People realized they didn’t have to commute into New York City for two hours every day. Maybe we just cut down on 100,000 cars? This could be the time that we saved ourselves, the great moment. Where we got to rethink everything.

Do you feel that you were doing designer toys before a lot people?

I was almost at the very beginning, the first guys were Hong Kong artists Eric So and Michael Lau in the late 1990s. I never thought I would ever be able to make toys because it was cost prohibitive. Now, it has become an extension of my fine art practice. Limited-edition designer toys can be made in small runs, like 100. It allows people in their 20s to start collecting and being a part of that culture. On Instagram, you can learn how to build a designer toy collection and share it with your friends. It makes people feel good when they share something and someone comments: “I hate you, I’m so jealous, I’ve been trying to get that toy for 10 years.” It allows the culture to grow.

How has it grown?

It started in Asia then when it hit America, they started by getting street artists involved. But street artists don’t really have characters, so they turned to the pop surrealists. We had characters. They told me the rules: ‘Everything has to be cute, no sex, no politics.’ I said, ‘If this is just a fun thing for me, I don’t have to follow those rules.’ I ended up becoming the biggest, independent toy maker on planet Earth, but I broke all the rules.

What was your first designer toy?

The first designer toy I did was McSupersize, making fun of Ronald McDonald, but also other people who ate McDonalds. Then, through my own company I released Fat Tony, where I depict what cereal mascots would look like if they ate the cereal. We sold 7,000 the first day and got in TIME and NPR. It got changed because it wasn’t just a bunch of doe-eyed, cute little things the toy industry was already doing. It made a comment on the larger culture. It brought this whole little world outside of the narrow ghetto they brought for themselves.

Right. It was then that I started thinking about Culture Jamming and the illegal billboards that I’ve done. It’s like advertising but creating a different message. People buy my toys and put them in their kitchen, then have a talk with their kids about how much sugar things have. “This is what you’re going to look like if you eat it.” It created a space where they could have that conversation. Kids would find it funny but would take the message and disseminate it.

That’s an interesting space to be in. When I was young, I never thought about disseminating social messages using toys. It wasn’t until I was approached to make toys, but it really is a great way to talk about things. Why would WWII be reenacted with GI Joe figurines, why didn’t we reenact the Vietnam War? Maybe because young boys knew they might get recruited?

“Popaganda” is the name for your mashup of high art and lowbrow, how do you keep a fresh perspective on American culture to do so?

The whole point is to make people see things a different way, right? Advertising has been a weird space for artists, to exploit too. At the same time, the supermarket is an amazing art show, when you think about it. Every package is an amazing design by some incredible designer, it’s the last advertising before you get to that product.

James Rosenquist got away with using advertising in art, so did Andy Warhol with his Brillo Boxes. How uptight have you found the art world to be, then and now?

Everything changed. All the rules broke down. I give credit to Keith Haring, he was embraced by the inner sanctum of the art world quickly. He didn’t realize he won the lottery. He wanted to have an art store and was told: ‘You can’t do that because of the art world.’ But the collectors liked his work and there was a panic buy for his work, so they let him do a store. But they, let him? There’s nothing different about his paintings because of a store.

Do you remember doing the All American Temper Tot flag mural in downtown Manhattan?

There was a thousand ads on that flag, all my billboards from over the years. But together, they weren’t controversial anymore, they got caught in a billion images in a big tapestry. You just look at it and think: “The world’s crazy.”