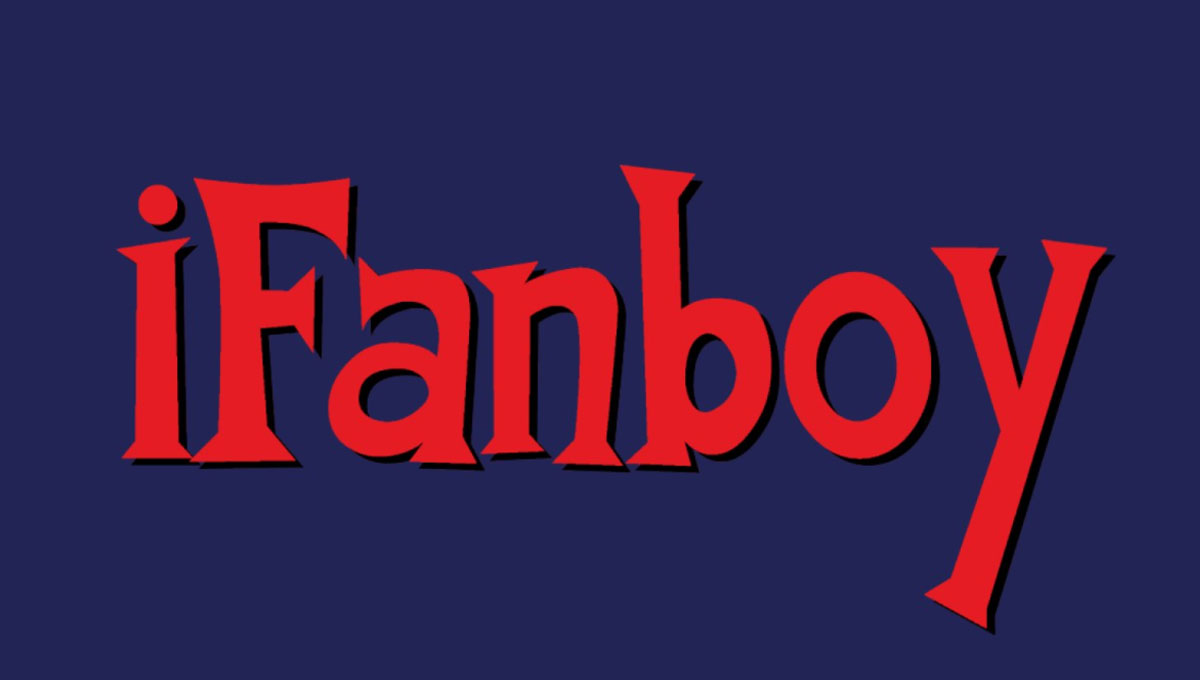 On Wednesdays, we talk about new comics! And on this fine weekly “new comic book day”, who better to talk to than the experts over at the iFanboy podcast? What started as a humble website in 2001 has evolved into the crazy-popular iFanboy Pick of the Week podcast and news source for all things ‘comic book’ related. Spanning over a decade, the iFanboy podcast and site features interviews with big names like Grant Morrison, Paul Dini, and Max Landis (just to name a few).

We talked to the iFanboys themselves – Ron, Josh, and Conor – about over a decade of their podcast, their brand spankin’ new Artist Shop, and of course, got some recommendations on what comics we should be reading right now. Check it out!

First things first, what are your top three favorite comics of all time? (I know it’s an impossible question, but we’re talkin’ if you were stranded on an island forever and could only bring three comics).

Ron: X-Men: From The Ashes, Richard Stark’s Parker: The Hunter, Strangers In Paradise.

From Grant Morrison to Paul Dini to Max Landis, you’ve interviewed huge names in the comic industry. Do you guys have a favorite interview?

Ron: When I look back at all the interviews we’ve done, the one that stands out is the great Darwyn Cooke. We were able to interview Darwyn several times, each time better than the last. No other creator has been as generous with his time as Darwyn, and no other creator challenged us harder to be the best interviewers we could be.

Conor: All of our Darwyn interviews were definitely a highlight. As for amusing challenges, one super high profile writer – who shall remain nameless – kept slightly rotating his body, which caused Ron (who was doing the interview) to shift with him, which caused me who was shooting the interview to shift with them both, and all three of us spun in a slow circle in the middle of the DC booth at New York Comic Con.

iFanboy has been going on for over a decade, that’s amazing! How did it get its start?

Ron: We started the website for iFanboy in 2001. After several years of blogging about comics for a near non-existent audience, in 2005 we experimented with podcasting. Thanks to being in the right place at the right time, the iFanboy Pick of the Week Podcast created a great community of fellow comic fans that came back to our website. Once Apple launched podcast support in iTunes in the summer of 2006, things took off from there. The podcast has become an integral part of our daily lives and what iFanboy is best known for.

Ron: Absolutely. The world we started in during the mid-2000s is dramatically different than the world today. To see the explosion of comics-related media and conventions has been both awesome and head spinning.

Conor: “Fandom” has certainly gone way more mainstream in the last 17-ish years. When we started, it was a much more of a niche thing. Even ten years ago, comic book conventions were much more lightly attended compared to now, where the big shows will sell out in literally seconds. Ironically, there is some anxiety in the community about the surge in popularity. There’s a feeling that it’s not genuine and that comics are being elbowed aside for movies and TV shows.

Josh, you’re a comic creator as well – tell us about your own comics!

Josh: Over the years of discussing and analyzing comics, I developed a great appreciation for the form of sequential art and what it can do, so I became very interested in trying to make my own comics. I’ve had varying success, but have learned a lot about working with some phenomenal artists, and have learned a lot about how comics are made. I’m not done yet.

Tell me a little bit about your Artist Shop! What made you want to start one?

Ron: We have been thinking about opening an Artist Shop with Threadless since they launched. Years ago, we sold t-shirts on the iFanboy website and handled the printing, ordering and shipping ourselves. Let’s just say that as a t-shirt seller, we’re a great comic book podcast. So when the opportunity to partner with Threadless – one of the best places online for t-shirts – came up, we knew that was the way to go. Threadless is a pro when it comes to printing and shipping t-shirts, so we know that our shirts would be made with better care, quality and execution that we’d be able to do ourselves.

Who did the art for your shop products?

Ron: When we launched the shop on Threadless, we took the opportunity to make available some t-shirt designs we sold a few years ago but haven’t had for a while. The iFanboy logo is an obvious one, but the HURM shirt is one that we created ourselves (and is no way inspired by any groundbreaking comics, no sir.)  To add for the launch, we have a great piece of art that comic artist Lars Brown did for us along with a new design we came up with, RATINGS, which is a fan favorite among the podcast listeners. We’ve got a few new shirt ideas that are coming soon, and we’re planning on adding more on a regular basis.

How will the Artist Shop profits help iFanboy keep being awesome?

Conor: Every little bit helps. In this new media economy, you have to have as many revenue streams as possible because the audience is so fragmented. On the other hand, though, that fragmented audience is much more engaged and much more incentivized to help out the shows they really enjoy.

The cross-universe battle you’d most like to see happen, GO.

Ron: I know that Josh is waiting for that rumored Preacher/Garfield crossover, but I’m not sure that will ever happen. Personally, I’d love to see a Watchmen/G.I. Joe crossover battle so we can finally find out who’s more badass: Rorschach or Shipwreck.

I love that you each have a kind of comic niche that you focus on – DC, Marvel, and more indie. What new comics are you 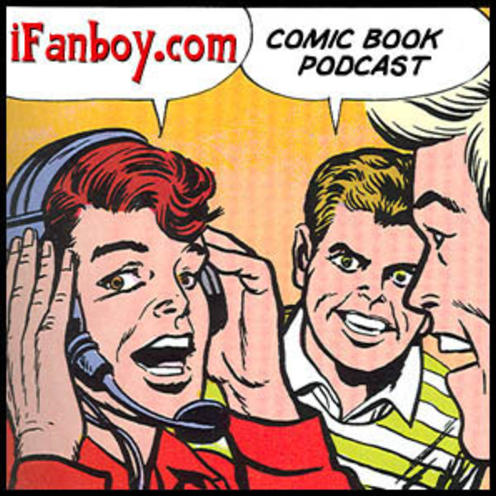 each fanboying over right now that we should all pick up and read?

Ron: The Flintstones from DC Comics. I know, it sounds weird, but Mark Russell and Steve Pugh have put together one of the best social satire comic books we’ve read in years. The Flintstones is hands down the best book being published in comics right now.

Josh: The Old Guard from Image Comics. We’re big fans of Greg Rucka, so of course we checked out his new book with artist Leandro Fernandez, and it’s paid off with every issue.

Conor: Black Hammer from Dark Horse comics. Jeff Lemire is bringing all of the emotional wallop of his indie work to this thinly-veiled tribute to Gold and Silver Age DC Comics with art by Dean Ormston.

A few years ago, you scaled back a bit with iFanboy – how do you balance everyday life with podcasting?

Conor: We started iFanboy when we were basically kids in our early 20s, started podcasting in our late 20s, and now that we close the book on our 30s, life is infinitely more complicated. There are wives and there are kids and there are day jobs to navigate around. Between our regular weekly show, our special edition shows, our monthly hang out with the members of our Patreon– not to mention other non-iFanboy podcasts that we regularly appear on – it can be a challenge. It’s a fun challenge, but a challenge nonetheless. I have so many novels that are stacking up because my reading for pure unadulterated pleasure time is dwarfed by the time I need to spend reading for the show.

Ron: Ultimately I can’t imagine life without the podcast. Every week I look forward to the hour I get to talk comics with my best friends. That makes all the other work that goes with it (all the editing!) worth it.

Ron: We’re incredibly thankful that after all these years, people still enjoy listening to us talk comics, and we’re even more thankful for all our supporters here on Threadless, on Patreon, and all the other places the iFanbase show their support.

For any readers new to iFanboy, just head to iFanboy.com where you can find our latest podcasts as well as our other info. Follow us on Twitter and Facebook @iFanboy.

Thanks to Threadless as well! We’ve been wearing Threadless t-shirts for over 10 years now and we’re super happy to be working with Threadless to help us with iFanboy shirts!