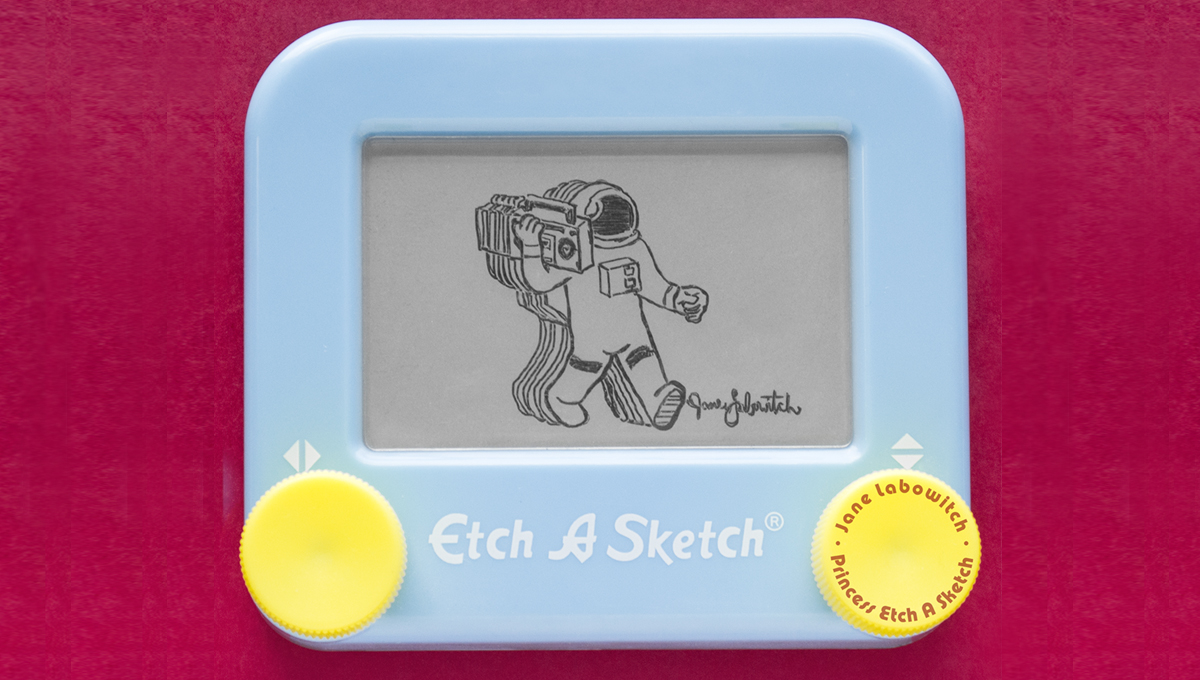 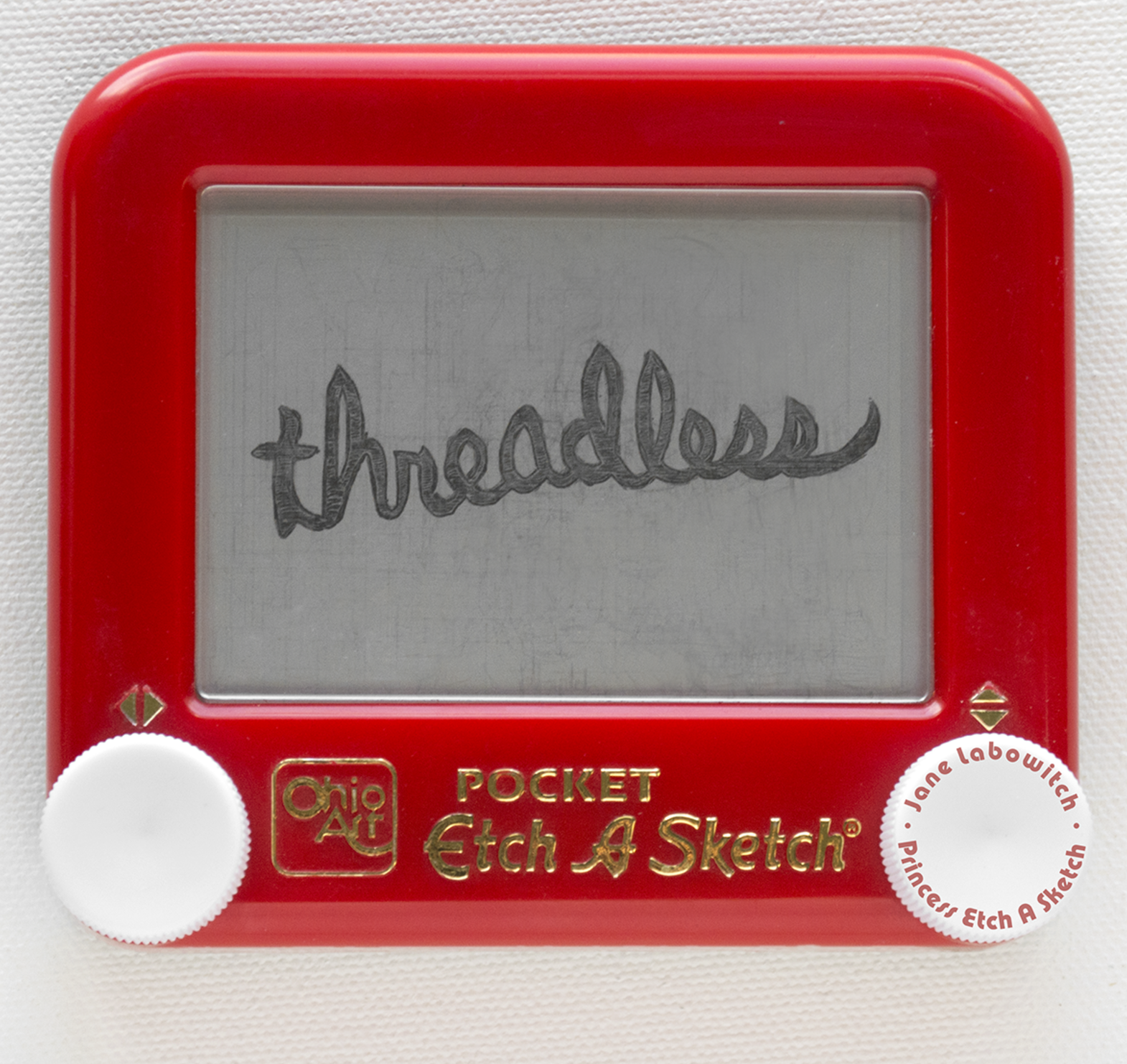 Remember playing with Etch A Sketches as a kid? For most of us, the crude line drawings that often looked more like the game Mr. Worm than anything usually ended in either frustration or accidental erasing (that was devastating). But one Chicago artist has tamed the Etch A Sketch beast and has made it her art form and life’s passion. Jane Labowitch, aka the aptly named “Princess Etch“, creates incredible Etch A Sketch images beyond our wildest childhood dreams. From five minute portraits she does for people on pocket-sized Etch A Sketches, to giant images detailed down to the shading (yeah, she shades on an Etch A Sketch) that take months to complete, her work is incredible. And we had to find out more.

We talked to the Princess herself all about how she honed her craft, how many Etch A Sketches she owns (spoiler alert: it’s well over 300), and about her artistic philosophy which, even if your art is the traditional kind and not the etch kind, all artists can learn from.

Ok, first question…HOW? Seriously: how did you teach yourself to sketch so precisely using an Etch a Sketch?! It’s so impressive!

The only reason I ever got into Etch A Sketch is because I would visit my grandma frequently growing up, and she would rarely let me and my siblings watch TV. So we had an Etch A Sketch laying around, and I played with it obsessively to fight boredom. I would render staircases again and again, trying my best to recreate that one scene in Aladdin where he climbs up the long staircase to retrieve the magic lamp. At some point in my early etching days, my brother showed me that if you turn both knobs simultaneously, you can create diagonals and curves. From that point on, it was countless hours of trial and error. At some point, I must have clocked in enough hours on the toy because it got to the point to where I didn’t have to think anymore about which way I had to turn a knob to get the line to do what I wanted. It was like I became fluent in a language. From that point, my etching and my drawing skills grew hand in hand. I attended art school here in Chicago, and though I wasn’t doing my assignments in Etch A Sketch, my skills vastly improved during that four year period because I was consistently practicing after class.

When did you first start learning how to draw so well on Etch A Sketches?

I started playing with an Etch A Sketch around the age of four. It’s strange to think of a time when there wasn’t one in my hand. Around age 16, I began taking Etch A Sketch more seriously (ironically) and dedicating more time to detailed renditions. It was around that time that I started tackling more difficult subject matters like self-portraits and Yoda. Then, I went to art school and really started cranking out etch art, which gave me an opportunity to improve on capturing proportions, as well as developing different techniques in shading.

How long does a typical Etch A Sketch image take?

It depends on the size of the Etch A Sketch I use and the subject matter. On a pocket (small) Etch A Sketch I can knock out a portrait of someone in about 5-7 minutes, and I typically do about 40-50 live portraits at an event. For my most detailed work on the classic (large) Etch A Sketch, such as the Sleeping Beauty castle, it usually takes about 20-25 hours for me to complete.

What did you etch for Disney and Cartoon Network? That’s awesome!

How many Etch A Sketches do you own? What are your favorite ones to use?

The number fluctuates, but I currently have around 350. From my desk right now I count 31 in my line of sight. They have a habit of piling up all over the place! My favorite kind to use is the old pocket size – a few years ago the pocket size was downsized a little bit, but I prefer the aspect ratio of the older size. And the Etch A Sketch I used for that Yoda rendition I shared above is a limited edition and has a metallic red frame and a gold screen. Every time I have used one, it’s had by far the best line quality of any Etch A Sketch I’ve ever used.

Have you ever dropped an Etch A Sketch and erased a masterpiece accidentally?

Yes! It sucks. It’s practically the same thing as watching a drawing spontaneously combust in your face. It happened a few times in high school, and it happened the other day when I got a little over-ambitious while moving a huge stack of unpreserved art. You’d think that by now I’d have keeping these things flat down to a science, but I suppose I get a little complacent from time to time since I’m so used to moving them all over the place. But for the most part, if you keep them flat, the art on the screen will stay put.

Is there a way you can preserve the image in the Etch A Sketch if you don’t want one to disappear?

Yup! It’s a messy but doable process. Basically, I drill a hole in the back of the Etch A Sketch and remove all of the excess powder from the inside. Then I seal up the hole I drilled and glue the knobs down so that they cannot be turned anymore. Without the excess powder inside of the toy, there is nothing left to recoat the screen when shaken. I’ve shipped preserved art all over the US and to Europe with no issue.

Despite the fact that I make a lot of my Etch A Sketch art permanent now, I still make plenty of art that is destined to be erased. Sometimes, that art is just for me – I will never take a photo of it, and I won’t share it online. And it feels good to make art just for myself.

Do you draw out your sketches first or just dive right in using the Etch a Sketch?

Sometimes I dive right in, but with more detailed work I do extensive planning. I typically toy around with reference images in Photoshop until I come up with a composition I like, then I work from a 1:1 scale reference. I often do a quick “test” sketch on another Etch A Sketch unit to get a feel for the proportions. Then I dig in!

What’s the most time-consuming piece you’ve ever done? What piece are you most proud of?

The answer is the same for both questions: it is this life-size rendition of a Skeleton, which took me about a month of solid work and four years of procrastination. I’m excited to announce that it will be in Art Prize – a huge art competition in my home state of Michigan – this year! 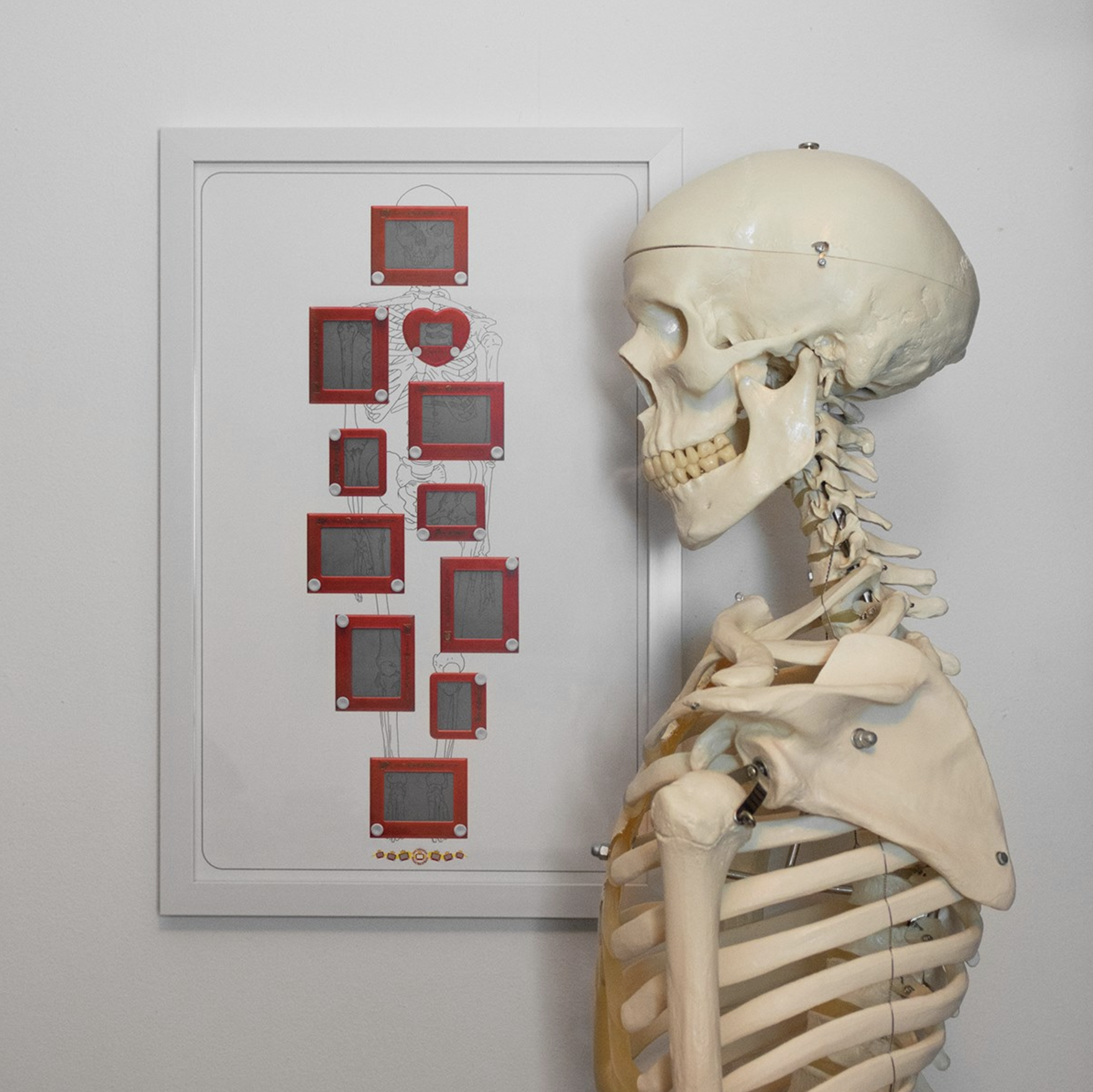 I see you teach workshops too! What do those usually cover? What other events do you do?

My workshops teach certain basics such as drawing different shapes, writing your name, and trying out more ambitious things by creating diagonal lines when turning both knobs. It’s essentially me teaching people how to take my job, haha. Every student gets a worksheet with detailed info on what turning each knob does what. I also etch portraits at events, host demonstrations, and host talks/Q&As. You can hire me to do these neat things by filling out my booking form here ~wiggles eyebrows~.

You’ve told me in the past about how having some of your works accidentally erased taught you a good lesson of moving on from an art piece because it was so temporary – what’s your artistic philosophy?

Despite the fact that I make a lot of my Etch A Sketch art permanent now, I still make plenty of art that is destined to be erased. Sometimes, that art is just for me – I will never take a photo of it, and I won’t share it online. And it feels good to make art just for myself. Outside of Etch A Sketch art, I’ve made loads of work that never sees the public eye. Sketchbooks filled with art have become my own visual diaries. One of my favorite things about being an artist is that I get to share my joy of creating with the world. But I have found it so personally fulfilling to also make art just for the sake of it. It’s unhindered by having to compose a social media post that’s just right. It’s unburdened by thinking of the perfect string of hashtags. I don’t have to qualm over carefully photographing it in the right lighting. I don’t have to stress about when would be the most optimal time to share it, to ensure that the post gains more traction. As a full-time freelancer, business collides with art, and I truly enjoy the marriage. But when I want to get back to my roots, to the unbridled joy I felt when I was first discovering how an Etch A Sketch worked at the age of four, then sometimes I make art just for me. It’s been important and even therapeutic for me to make art just for myself. It helps me validate to myself that I am doing art because I am truly passionate about it, and not just for those imaginary internet points that we oh-so crave. I think it’s awesome to share your art with the world, and I encourage everyone to do it! But I’ve found it personally fulfilling to also have my own secret art that’s just for me.

You can find my work at princessetch.com, and you can keep up-to-date with my art by following my Instagram, Twitter and Facebook pages. If you ever draw something cool on an Etch A Sketch, please tag me because I’d love to see it :)