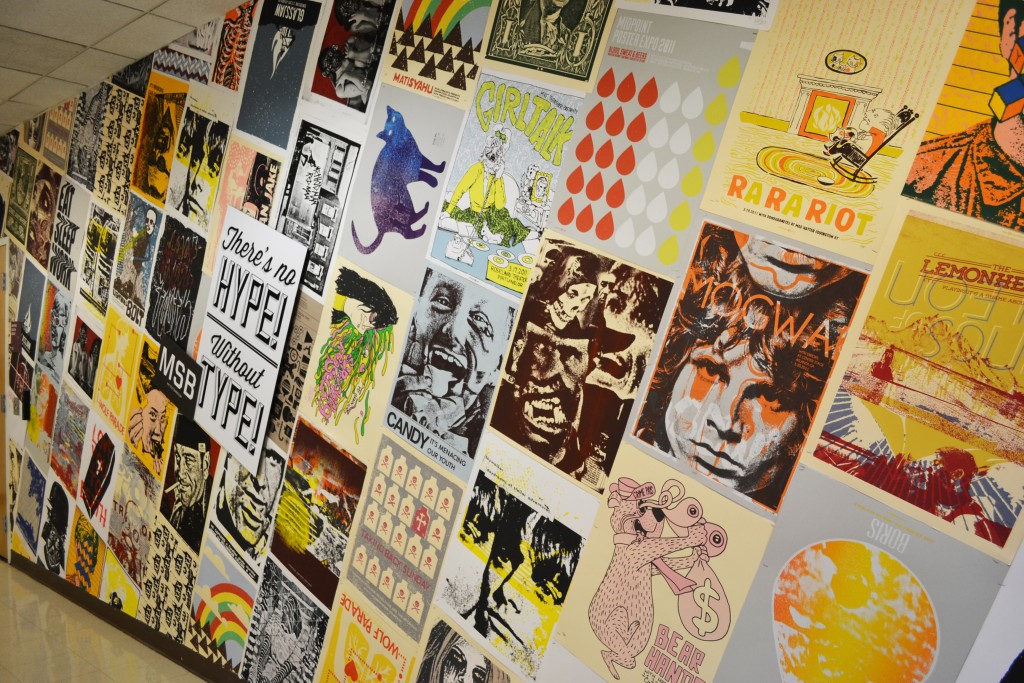 Welcome back to Tuned In – an ongoing series highlighting the best concert posters of the month (if you missed June’s roundup, check it out here!). These limited-edition posters are typically available for purchase at each band’s merchandise table during the show, with a smaller portion sold directly from the illustrator or design studio.

I expected July to be a huge month, especially with the Grateful Dead’s “Fare Thee Well” shows in Chicago, and the Foo Fighters’ massive stadium tour, but this is ridiculous. July is by far the largest selection we’ve shown in a month with eleven, individual posters commemorating some of the hottest shows of the summer. Throw on your favorite album as I round up the best posters of July:

I’ve been waiting for the perfect moment to drop a Morning Breath, Inc. poster on you, and here it is! The Brooklyn-based graphic art studio has been working heavily with the band for almost a year now – designing all the posters for their Sonic Highway club tour, album artwork, T-shirts and this beauty for the Foo Fighters’ show at Fenway Park, home of the Boston Red Sox. Inspired by the park’s “Green Monster”, and using the manual scoreboard as a font, this 5-color print is limited to 375 and available now.

After a little fine-tuning in Santa Clara, California, the Grateful Dead played their final shows at Soldier Field in Chicago, Illinois. The three-day event, dubbed “Fare Thee Well” had their devoted fans jamming along the lakefront all weekend long. The historic show had a number of talented illustrators printing posters, but AJ Masthay’s had the right amount of fondness with nods to iconic characters in the Dead’s 50-year history. Although they are three individual posters, they were sold as a matching number set, with an edition of 50.

Another newcomer to the series is Barry Blankenship, an illustrator and graphic designer from Redmond, Washington. A lot of his posters are for venues in the Washington area, making him an artist I wasn’t familiar with until seeing his poster for David Gray & Amos Lee’s co-headlining tour. I’m a sucker for color, and his use of hot pink smoke against a dark night drew me in immediately. The 3-color print is limited to 145 pieces and available now. If you’re feeling lucky, try his Random Poster Sale where you’ll get 5 posters for $35!

If you read my post earlier this year, “Foo Fighters: 20 Years of Posters”, you should be familiar with Jermaine Rogers and his knack for recreating classic album covers with his furry friend. 2008 saw Rogers deliver two Foo Fighters posters inspired by David Bowie’s Aladdin Sane, and the Clash’s London Calling. Fast forward seven years and we get his latest for the band’s show at Citifield Stadium in NYC, paying homage to Black Sabbath’s 1972 album, Vol. 4. A total of four versions were made, the original with a white border, and three variants: Red, Black and Blue Raspberry.

Two of my favorite artists, Nate Duval and Justin Helton (of Status Serigraph), have joined forces for Widespread Panic’s set at this year’s Forecastle Festival. On top of the stellar design we’ve come to expect from both artists, they upped the ante with this poster’s ink and the material they chose to use for printing. The standard edition uses three colors on metallic, pearlescent, color-changing paper and is limited to 20. Two variants—both sold out—go even further: one printed on wood veneer, the other printed on rainbow holofoil.

Built To Spill by Jim Mazza

It may be coincidence, or just the artists I’m following, but there has been a definite increase in triptych prints; three individual posters creating a larger scene. We saw one last month for Governors Ball, another for My Morning Jacket’s three-night run in Chicago, quite a few for the Grateful Dead’s shows, and this cartoon-inspired poster for Built To Spill’s show at the Troubadour, by Jim Mazza. Mazza has been creating posters out of Los Angeles for the last decade, working with Band of Horses, Avett Brothers, and Eric Church to name a few. If you’re a true collector, you’re already too late, as the second date/middle piece is sold out. Nights 1 & 3 are still available for purchase.

While it certainly isn’t unusual for San Francisco’s Chuck Sperry to print variants of his posters, this might be a record. Sperry’s poster for Dave Matthews Band’s show at Virginia Beach, Virginia, has an overall edition of 750, spread out over six different posters! All of them feature his instantly recognizable muse surrounded by flowers with variations of either ink or paper. All variants – Blue Opal, Parchment, Satin Black, Rose Hair, Blue Linen – have sold out, you can see them on Chuck’s site.

August is already looking to another big month and we’re not even halfway through… As always, let us know what you picked up and support live music.