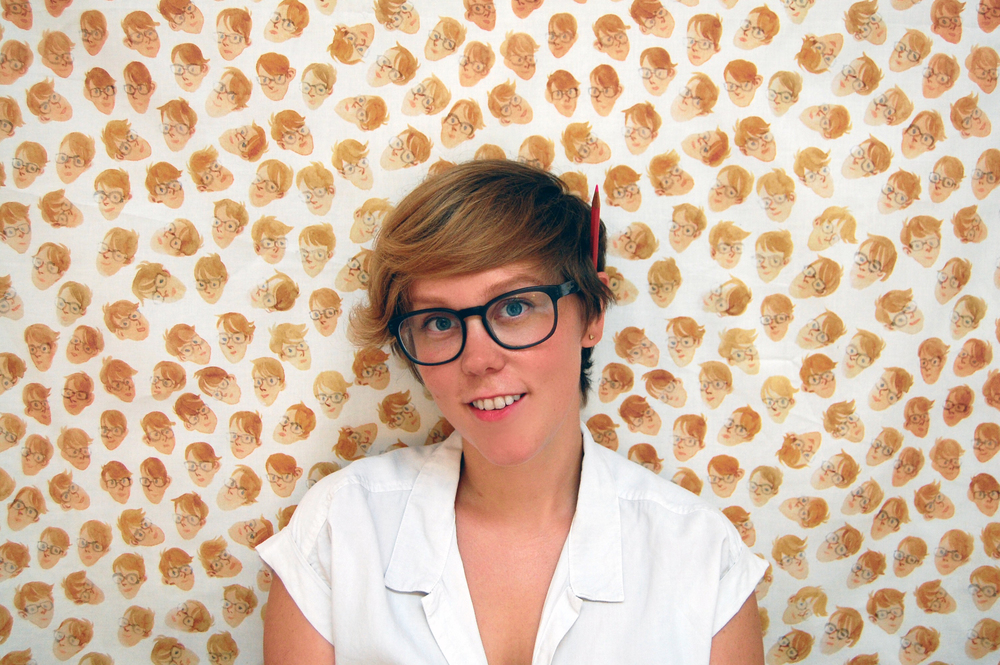 Lucy Knisley is a geek. She’s a food lover, or as she’s been called by NPR, a “food nerd.” She’s a confident, candid, charmingly self-effacing and (at times) silly woman.

Even though Lucy doesn’t see herself as a productive writer (Her exact words when I referred to her as such were “Ha haaaaaa”), it’s hard as an outside viewer not to disagree with her. In the past few years, she has published a book a year. Her food memoir, Relish, which chronicles her relationship with food complete with fantastic infographics of her favorite recipes, was published in 2013. It was a NYT bestseller and an ALA Alex Award Winner. Her subsequent travelogue, The Age of License, is about her time in Europe, attending and teaching at conferences, having a romantic rendezvous, and looking towards the future after a breakup with her longtime boyfriend. 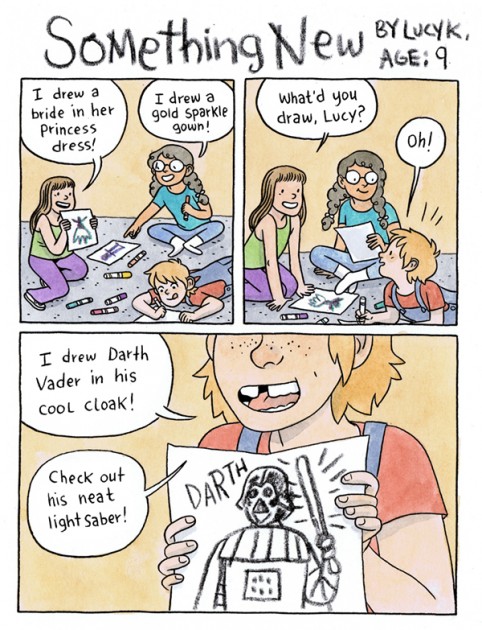 Last year, Lucy published a new travelogue, Displacement, again to critical acclaim, about taking her 90-year-old grandparents on a cruise. In addition to her books, Lucy does commissioned art and illustrations, writes a web comic, Stop Paying Attention, worked on comics for Marvel, and has self-published five books, one of which is a travelogue of her visit to The Wizarding World of Harry Potter called Here at Hogwarts (Lucy also created eight posters of the Harry Potter movie plot lines, which she was kind enough to share with the world for free).

Lucy’s new book, Something New, about getting married will be released this May from First Second Books, so it seemed like a great time to chat with Lucy about some serious things, some silly things, and of course, a few geeky things. 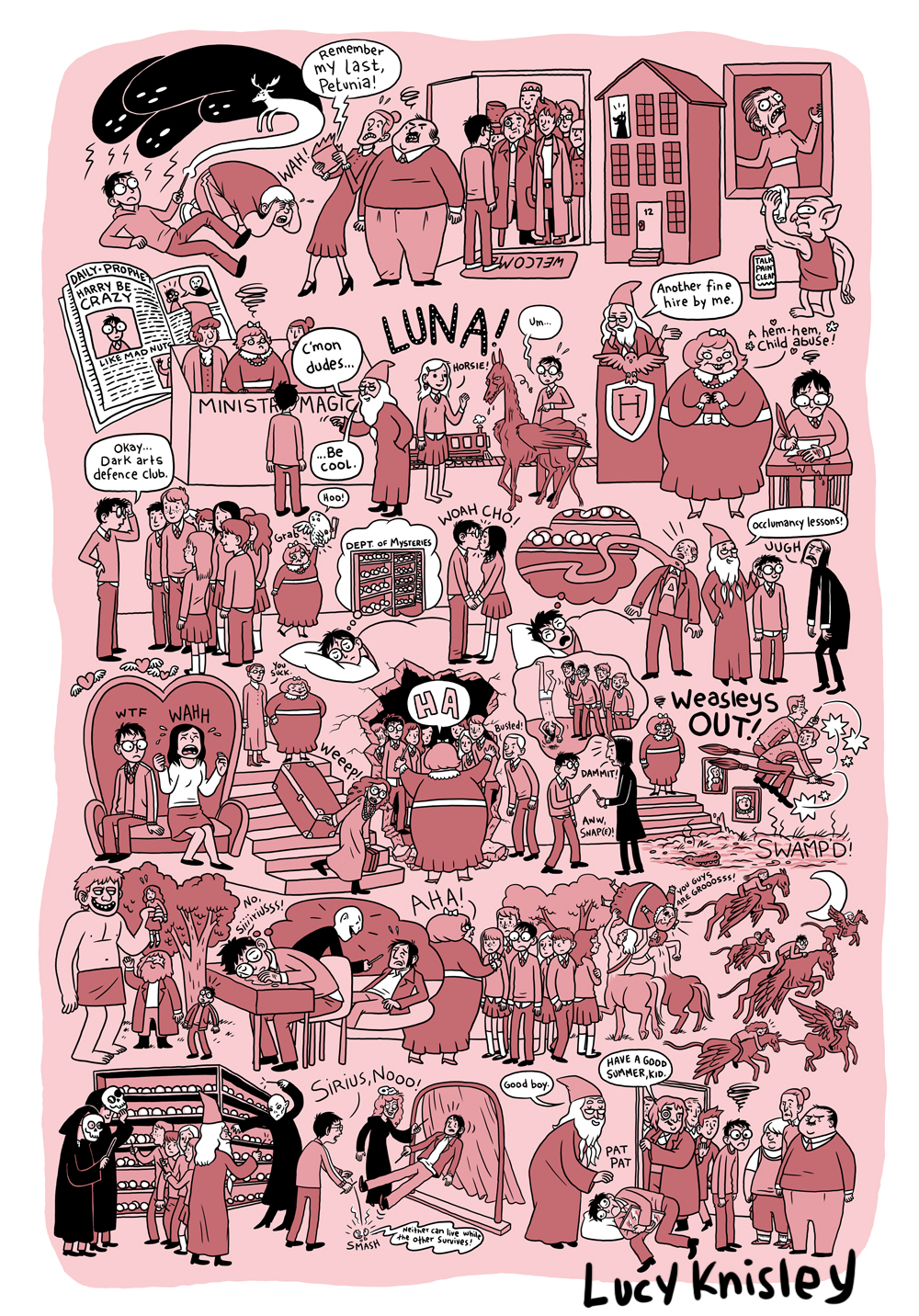 One of the things that I love about your work is your openness. I think that intimate and loving moments take an amazing amount of guts to write and share with others. What do you think?

I love to share those moments with people, because what readers find touching about them is their own connection to moments like that— I think that’s what makes writing so rewarding; to create that connection, that “oh, I know that feel” moment, and to make both myself and that reader feel less alone in their experiences and emotions. What I find most terrifying in terms of sharing content is fiction. Where I am confessional and honest about my experiences, I find this to be a natural storytelling format. To share the dark fantasies that nobody has ever experienced seems a much greater risk. Instead of “here is the world I know” it’s “here is my made up fantasy for your examination.” It terrifies me, but I hope to expand my storytelling to encompass fictional work someday.

Continuing with the idea of challenging subject matters, your latest work, Displacement, is about the time you took your grandparents on a cruise. The book is a departure from your earlier work and about the not-often-discussed topic of aging and care-taking. Why did you decide to write about this subject?

My relationship with my grandparents has always been something I’ve wanted to understand better. There’s a lot of humor and a lot of sadness present in the love of an aging relative that is very universal, but my relationship with them is also very singular. That’s what makes this story compelling to me. I wanted to record this experience for myself, to try to better understand what was going on between us and how I related to them, but it was also a coping strategy when I started out thinking this might be a little funny and frustrating, and it turned out to also be sad and insane.

Going more specifically into how you work, can you describe your creative process?

Er, no. It’s a lot of sitting and staring and then sketching and messing around on the computer. Not very interesting.

Do you have a favorite part of the creative process?

Being finished with something and getting to rest on my laurels a bit.

Every writer or artist experiences rejection, how do you deal with it?

Quietly, angrily. Then I do my best to forget it and move on. 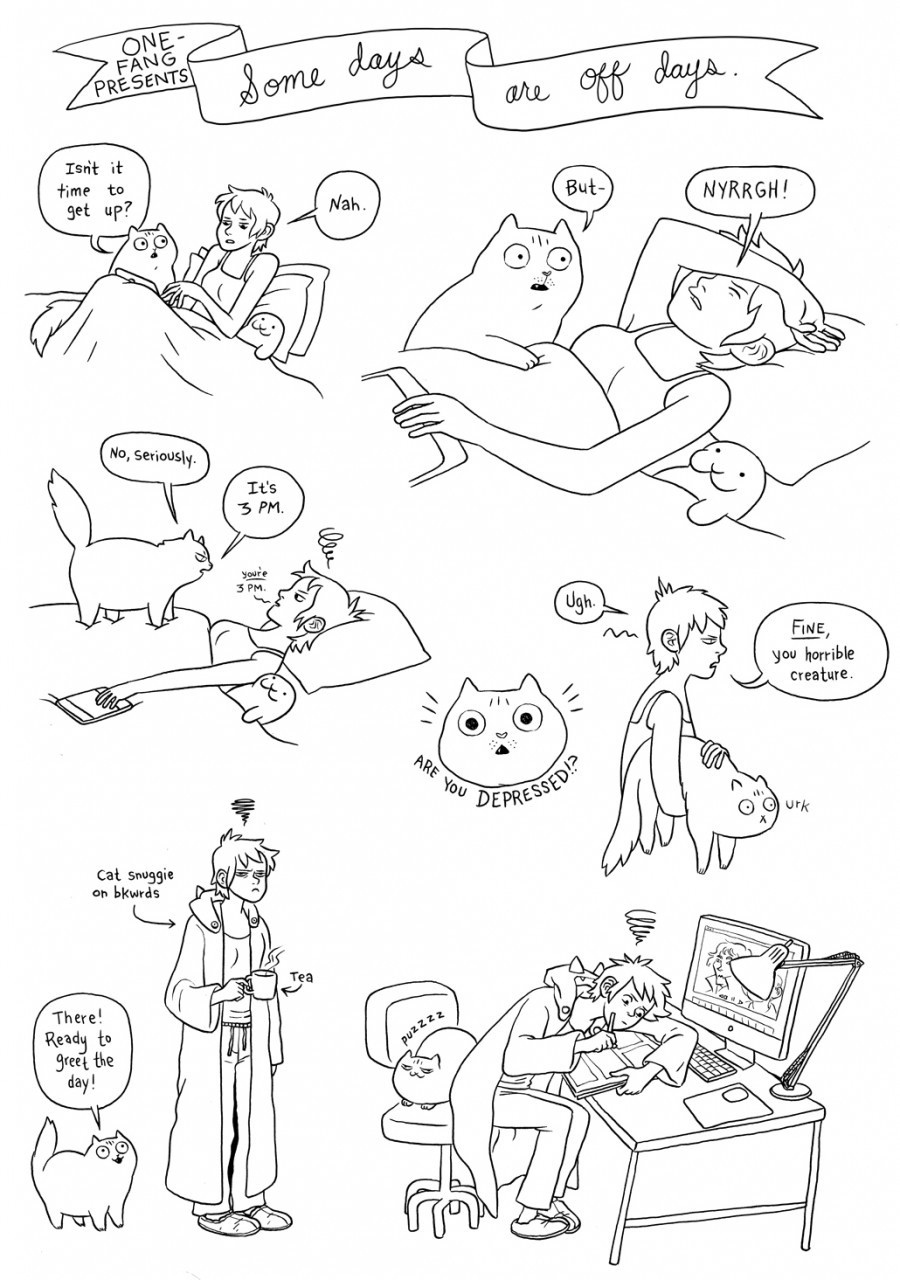 Ok, now that you’ve been nice enough to answer some serious questions, let’s do some fun ones. Pie or cake?

Pie. I live down the street from Hoosier Mama Pie Company in Chicago, and it’s a dangerous, dangerous proximity.

In a fight between red and purple, who would win and why?

Red is primary, undiluted with blue, so it’s got a stronger foundation to build on and will be more likely to turn purple into a bluey red!

Color wheel! I love them and use them frequently. I learned color theory when I tagged along with my mom to an adult art class as a kid, and I have been totally fascinated and underwater with it ever since.

Let’s get full geeky here. If you were going to Cosplay as any character, who would it be and why?

I’ve cosplayed as Doctor Girlfriend from The Venture Brothers, Carrie Kelley (Girl Robin), and Fionna from Adventure Time for a couple Halloweens, although I know cosplay pedants will argue that Halloween doesn’t technically count as cosplay. I rocked that Dr. G costume. I would do it again. I could do the voice and everything. My husband went as an AMAZING Monarch.

If you could design a t-shirt, what would you have on it?

I’ve designed a bunch of t-shirts, but usually only for me and my friend, Nora. We made one with Billie Jean from The Legend of Billie Jean on it, with “FAIR IS FAIR” beneath her. I love that shirt. I searched for ages for a Angriest Dog in the World shirt, because I couldn’t understand why such an amazing comic didn’t have merchandise I could plaster on my body, so I secretly screenprinted my own version of it. In truth, I’m not super-great with t-shirt designs. Actually, my favorite t-shirt is Emily Stackpole’s Knotty and Nice, which I bought from Threadless like six years ago and I’ve worn to paper thinness.

Do you have a cooking project or obsession right now?

BAKING. Actually, when the weather cools, I go crazy for all kinds of cooking. I’ve been focusing on baking recently, though. It’s more foreign and challenging to me. I learned how to do a three layer cake last week, and it was okay.

What are five of your favorite books?

Oryx and Crake by Margaret Atwood; Me Talk Pretty One Day by David Sedaris; Youth In Revolt by CD Payne (don’t judge it by the weird movie they made of it); Robin Hobb’s Realm of the Elderlings series; Fangirl by Rainbow Rowell; The Cheese Monkeys by Chip Kidd; Eva by Peter Dickinson (it is this insane YA book about a girl who gets a chimpanzee brain transplant); The Phantom Tollbooth by Norton Juster and Jules Feiffe; and Daisy Fay and the Miracle Man by the incomparable Fannie Flagg.

Okay that was nine, sorry not sorry.

Do you have a contemporary issue or cause that is particularly important to you?

I want Planned Parenthood to be the top-funded organization in the world, and I really don’t understand why it’s not. My friend, fellow cartoonist, Erika Moen, and I usually do an annual art auction or sale as a fundraiser for it. We’re cooking up a new one right now. Women’s’ health and reproductive rights are incredibly important, and I do my best to blather to all who will listen about period health and cool new birth control techniques.

Do you have a go-to doodle or doodles?

My whole career is based on the fact that I’ve always tried to get my self-portrait right. I think self-portraiture is very revealing and a constant attempt to know yourself and understand how the world perceives you, which is to understand what it’s like to be someone else. So my own doodles tend to be of myself, and I feel like they’re always changing.

That answer is really surprising and interesting to me. Is there something that you continually struggle with in regards to your self-portrait?

I like to change my hair pretty frequently, so it always throws me when I have to adapt my drawing of myself to match newly short hair. But that’s all surface—the idea that a few lines can convey who a person is—that’s what really matters to me. That you can look at those lines and recognize an individual, and consistently so. It’s grounding, and self-exploratory, to know yourself as a character or an image. I think it’s why people like blogging and taking selfies so much. 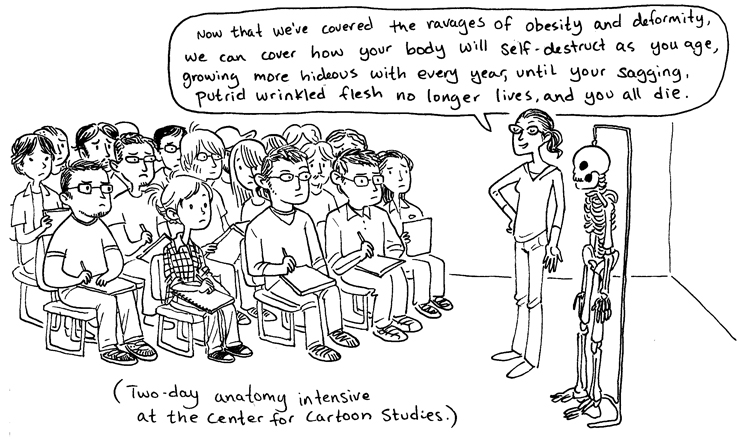 It’s not necessarily conceit or self-absorption. I see a lot of this attempt to reconcile your inner self with the way the world perceives you in the years of early adulthood, when you’re discovering who you are and want to be for the long-haul. Comparing the image of your outer self with your inner self is something that connects us to other people – trying to imagine how we’d be seen from the outside of our own private meat prison. It’s not new, though the internet and technology has given us new ways to do this. Ancient cave paintings depicted self-portraiture. Humans will always have their own special ways of trying to look into their own eyes to try to better understand themselves. Mine happens to be by compulsively doodling myself.

Can you tell us a little bit about your new book, Something New, that is slated to come out this May? 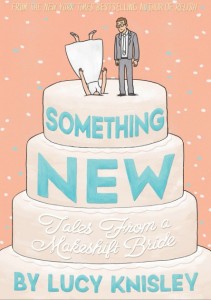 I went from totally single to engaged in the space of a day. I had no expectations going into the massively structured wedding industrial complex, and I was totally thrown by the mysterious customs, history, and commerce of the thing. I began to amass insane stories from this process, a general “What is happening—this is crazy” collection from the nerdy, feminist, bridal front lines, and that became this new book.

Is this your boyfriend from Relish and the one you were broken up with for Age of License?

Yep! You can read about how we went from together/single/engaged in my comic on Stop Paying Attention, titled A Light That Never Goes Out.

Lastly, do you have any advice for young wannabe writers or artists?

Don’t read reviews or measure yourself by them. “Likes” and reviews are impossibly addictive, and can confuse your own sense of self as an artist with a sense of “what the people want.”

Cultivate older and younger friends in the business. The spectrum of new talent and established talent will help to balance you in your own work and give you a connection to the work when it was new to you, and how it might be for you in the future.

Don’t be so hard on yourself. It’s a great way to burn out and hate your work.

NOTE:  Women & Comics is a monthly interview series. You can read a past interview with Nicole J. Georges.