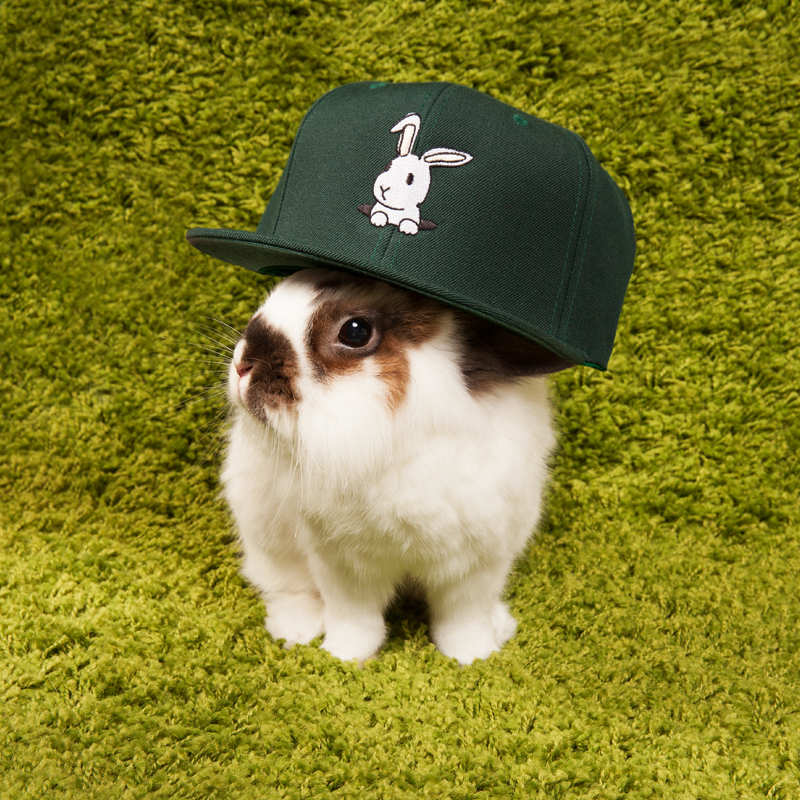 Who doesn’t want an adorable rabbit friend with them all the time? Thanks to the winner of our hat challenge, now everyone can have their own floppy-eared bunny buddy with none of the maintenance. Threadless alum and former Threadstaff member who headed up our ‘select’ line Ross Zietz (arzie13) took the whole “pull a rabbit out of your hat” idea to meta levels, bringing one of his bestselling pin/patch designs to hats!

We talked to Ross about what it’s like seeing his designs worn by Will Forte on The Last Man on Earth, how two of Threadless’s top ten bestsellers are his, and about his winning hat design (with bonus info about his epic Shiba Inu). Check out what he had to say below!

Your winning rabbit design is new to hats but you’ve been making it as a pin/patch for quite awhile! Has it been your best-seller?

Ha, yeah. I’ve been making some enamel pins shaped like the little guys. You can wear them above your pocket and it looks like they’re just your little pocket buddy…or pin pals. I called them pin pals.

Does this bunny design have a name?

I like the idea of each owner naming their own, ha. For the pins I name and number each of them like they’re beanie babies.

That’s awesome. When did you first come up with this design?

Two years ago I first sketched out the pocket rabbit enamel pin pal, and this is really just a variant version of that for pocketless people.

Do you do art for a living or just on the side?

I’m a freelance Creative Director for a living as well. It’s a pretty great gig.

A ton of your designs have been featured on The Last Man on Earth! What’s it like to see them on TV?

Haha…Really fun. I love Will Forte, and though it took some episodes I really got into Last Man on Earth. I was a weekly watcher, and then all of the sudden he wore like three of my shirts in a row. Very cool, and one of the beauties of Threadless is that since most of them aren’t branded, they work great in wardrobe for TV and movies.

You’re very much a Threadless alum in every way – how has your style changed since you first started submitting to (and working at) Threadless?

Maaaaannnnnnn, I first submitted almost 15 years ago…Through out that whole time I don’t really think I’ve ever had a particular style. I feel I’m better at coming up with an idea first, and then finding a style that would look good for the design.

Two of the top ten bestselling tees of all time (besTEES) are yours! What do you think attracts people to your style?

I think of the t-shirt medium almost as a billboard on the highway. Most viewers will only see the design for a few seconds, so I try so make something that gets the concept across as quickly as possible. The less explaining the wearer has to give the better. Also, people seem to like puns on tee shirts.

Is making/selling pins something you’d recommend to other artists? It’s seemed to work really well for you.

They seem to be a bit of a fad at the moment, but people have been collecting them for ages. I think just only fairly recently (within the past three years or so) artists realized they’re pretty easy to produce, and because they’re small and durable they’re pretty easy to ship. Also social media has made it easier to get the word out that you’re selling them. That said, there are some limits to the medium itself and it definitely works better with some styles more than others.

What inspires your art?

Cheesy, but I just want to make something that might make some random person across the world as happy as I am while I’m making it.

A lot of your designs have an outdoorsy vibe – big outdoors person?

I’m a poser. I’ve lived in two big cities for the past 13 years, but I think that’s why I love the outdoors so much. It’s an escape for me. I just wish I could be outdoors more.

Finally, tell me everything about your Shiba Inu Red, because he’s adorable. Will there ever be a pin based on him?

He’s the best. He’s more of a cat than a dog demeanor wise. He sheds like crazy. He’s tired of me taking pictures of him but deals with it. He loves popcorn…and there might be a shiba pin in the works.